It is a pleasure and a privilege to present the 2018 report of activities of the Blue Horizon Bay Community Watch, an organisation which strives to be adequately equipped and prepared to provide support and assistance in emergency situations threatening the security, lives and property of the residents and property owners.

SECURITY COMMITTEE
The year 2018 was a turning point in BHB when criminals discovered our village. In the period 12 August to 20 December there were 10 house breaks and 7 attempted house breaks. In two instances, 8 September and 20 December the perpetrators came before midnight and threatened and robbed the occupants while they were still awake and had not set their alarms. BHBCW requested that the independent group Baywatch and BHBCW work together and we added 16 BHBCW members to the group of patrollers. This increased the power of the patrolling group considerably and they have been performing an excellent task in attempting to keep BHB safe. On the evening of 31 December our patrollers ensured that roadside braai fires made by persons waiting to enter the Van Stadens Resort the following day were doused, thereby eliminating possible fire danger to BHB and surrounds.  BHBCW also took the initiative and organised two successful community meetings where the security situation was thoroughly analysed and solutions sought.  The SA Police Services became involved and they made significant inputs at the community meetings. They have also increased their patrolling in the village. After a decision taken at the meeting of 20 October, BHBCW started the process of installing a panoramic view camera and a number plate recognition security camera at the BHB entrance. This should increase the monitoring and solving of criminal activities in the village. Members of the BHBCW Management Committee closed virtually all the pedestrian entrances to BHB to make it more difficult for criminal elements to enter the village.

Ed Alberts from BHB Security supported by Hannes De Beer continued to perform their valued patrolling at all hours. As an accredited security company, BHB Security was able to perform tasks that fall outside the area of legal capacity of the  BHB patrollers.

BHBCW  is privileged to be part of this Forum and we attended several meetings. The mutual support of the neighborhood watches of Theescombe, Seaview, Beach View, Farm Comm,  Chelsea and BHB ensures that the Sector 3 Rural Policing Forum of the Kabega Park Police Station is a powerful organisation. The SAPS Manager of Sector 3 RPF, Warrant Officer Willem Van Heerden, once again provided us with valuable information, support, guidance and inspiration. He has personally become very involved in the criminal activities in BHB and was instrumental in the arrest of suspected burglars.

BHBCW was able to obtain the support of  Farmcomm in attempting to track and arrest criminals in BHB in one of the latest incidents.

More than 100 families have joined Medic-Assist (ECMR) which provides an outstanding service to our village and surrounds. Their close co-operation with Gardmed ensures that a sufficient number of ambulance vehicles are available when needed. Thank you Norman Nichol and Jeanette Nolte for being the liaison for  the ECMR ambulance service for many years. During the year ECMR responded to several call outs in BHB.  Eugene Muller and his staff made a special visit to BHB in February to collect the annual fees and to enable new members to sign up. We welcome Jenny Bell as the new coordinator of the ECMR Program.

DISASTER  COMMITTEE
Although we did not have major fires as experienced in 2017, the fire team kept our old fire engine operational. The team was involved in dousing veld fires in the surrounding area and at the BHB rubbish dump at the end of the year. Their prompt reaction doused a fire in the early morning which could have caused major damage in BHB. A big thank you  to Gerry Strydom from the Uitenhage Fire Station and Louis Linde from the NMBM Fire Station for regular support in providing fuel and parts for the fire engine. Thank you to Deon Potgieter who has taken control of our fire engine. He was ably assisted by Christo Keyter and Hennie Fourie.

The BHBCW WhatsApp groups have worked well in keeping members informed of criminal activities and other important information.

The Area coordinators are the link with members in their area and have an important position in the BHBCW. They motivate residents to join BHBCW, update personal information and collect the affiliation fee from members. A satisfactory number of 120 plus families are members and several new members, including new residents have joined during the year.

A word of sincere gratitude goes to:

– All members of the BHBCW for your support during the past year.

– Ed Alberts, Anton Swanepoel and Hannes De Beer for their excellent work in serving the community in ensuring the security of our residents..

– The members who selflessly volunteered to patrol the village and surrounds at all hours of the day and night.

– Bob and Jenny Bell for their valued support during the year. They have been a very important liaison between the BHB Community and the Nelson Mandela Bay Municipality, especially Ward 40 Councillor Jason Grobbelaar.

I believe that the Blue Horizon Bay Community Watch offers much to the residents in our village. We are fortunate that the essential services are performed by professionals. This relieves the pressure on the community. Blue Horizon Bay Community Watch will, however, only reach its full potential once all the residents and property owners of BHB become members. 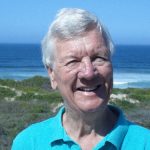 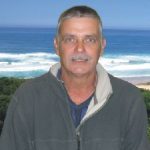 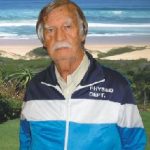 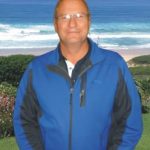 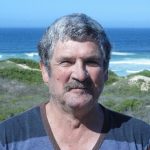 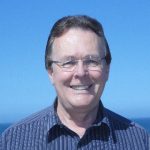 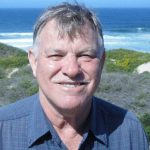 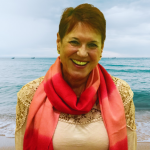 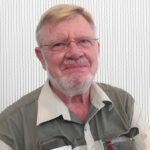 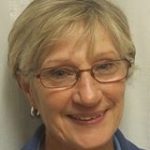 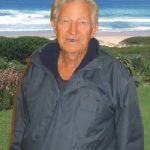 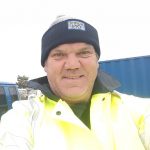 “The South African Police Service awarded the BHB Community Watch a certificate of appreciation for its loyal support. The Chairman, Mr Peet Vermaak, received it at a function on behalf of the Community Watch. 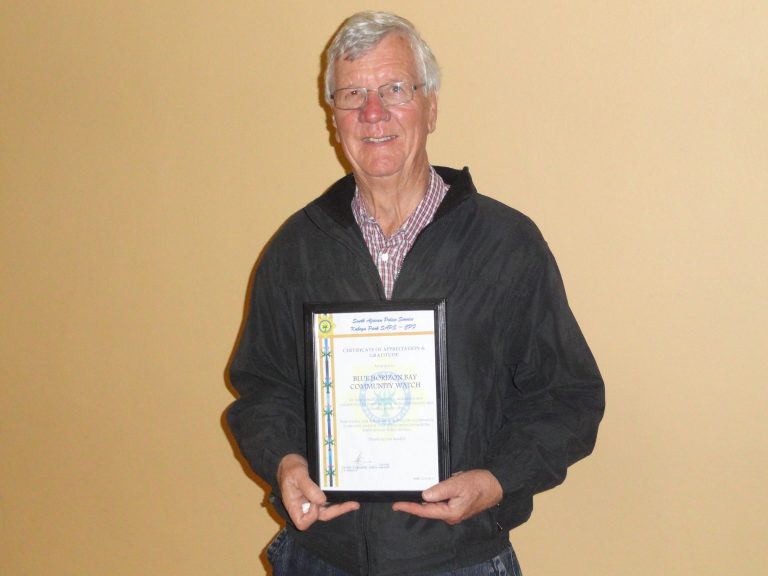